I am a fan of Roald Dahl’s work like Charlie and the Chocolate Factory, Matilda, James and the Giant Peach and the Fantastic Mr. Fox. But to be honest, I have never heard of The BFG until I leaned that Disney had made a major motion picture based on the book. I looked up Dahl’s work and there are a lot of books I am unfamiliar with – in addition to The BFG.

The film was directed by the legendary Steven Spielberg. Dahl, Disney and Spielberg together in one project? This has to be good.

I admit when I first saw a teaser trailer for The BFG I was like “eh.” I didn’t seem that interesting. It wasn’t until I saw the full trailer that he film really caught my attention.

Wow! Just wow! This movie blew me away.

The BFG is the story of a young orphan girl named Sophie (Ruby Barnhill) who lives in an orphanage in London.

One night she wakes up in the middle of the night. She peers outside the window and sees a giant figure on the street. Frightened, Sophie retreats to her bed. But it’s too late, the giant beast she witnessed outside saw her too. In fact, he reaches in the window and snatches Sophie.

Sophie finds herself in the clutches of not a beast – but a giant man (voiced by Mark Rylance). Giants have been known to eat people – especially children.

Sophie is brought back to his cave.

He introduces himself as Big Friendly Giant, but Sophie refers to him as BFG.

BFG doesn’t want to eat Sophie. Other giants eat children, but not him. Sophie also learns that she must stay with him because he can’t take any chances of her letting other people know that he exists.

Sophie learns that BFG has the ability to capture and release dreams from a magical pond.

BFG is a harmless, friendly giant who, like Sophie, is lonely. They soon form a friendship and special bond with one another. It’s as if they are kindred spirits.

Their happiness is short lived when other giants who are bigger than BFG and very mean, find out that BFG is hiding a human. They want to find Sophie so that they can eat her.

BFG is able to hide Sophie from them, but for how long?

Sophie also learns that the other giants age BFG’s last human friend and that the giants are set on eating the children of London.

Sophie devises a plan to stop the other giants, but she needs the help of the Queen of England. She needs to convince the queen that such giants exist and that the people of London are in trouble before it’s too late.

Can Sophie and BFG stop the other giants from eating anymore people? Will anyone believe that giants exist – especially the Queen of England? To find out you need to pick up a (or download) a copy of  The BFG, now available where movie are sold.

Visually, the film was amazing. I especially like how Sophie – played by an actual person – fit into the animated and computer generated background so seamlessly. It’s as if there was no line between reality and fantasy. It all fit together perfectly.

I love the friendship that formed between Sophie and BFG. As I said earlier, it was as if they were kindred spirits. I fell in love with BFG. He was such a kind and gentle soul. I want my own BFG! LOL!

I would consider this a family friendly film. I think there is enough in this film to entertain and delight both young and old alike. Some scenes might be a bit scary or intense for little children, but for the most part I think this is a family friend film.

Even though the ending wasn’t what I expected it would be, the film did leave me with the “warm fuzzies.” It made my heart smile. My husband and teenagers even enjoyed the film.

The film does come with plenty of bonus features worth watching.

The Big Friendly Giant and Me – Sophie wasn’t the first “bean” in Giant Country—many illustrations were created as if drawn by a little boy who was there long before Sophie.  This charming, in-world short will bring the drawings to life with animation and narration, recounting the friendship and the dreams shared between the boy and the Big Friendly Giant.

Gobblefunk:  The Wonderful Words of The BFG – A whoopsey-splunkers tutorial on the meaning of the gloriumptious gobblefunk in “The BFG.”

Giants 101 – Jemaine Clement (Fleshlumpeater) and Bill Hader (Bloodbottler) introduce us to the loathsome giants in “The BFG,” along with movement choreographer/motion capture performer Terry Notary, who collaborated with the actors and Director Steven Spielberg prior to filming to develop their movements and character traits.

Melissa Mathison: A Tribute – An homage to Melissa Mathison, the extraordinary, Oscar®-nominated screenwriter of “The BFG” and “E.T.,” whose talent and heart were as immense as the giants in “The BFG.”

John Williams: Scoring A Dream – A journey through the film’s concept art and memorable moments, interwoven with the sights and sounds of legendary composer John William’s scoring session.

Gobblefunk:  The Wonderful Words of The BFG and Melissa Mathison: A Tribute

If you only watch a few of the bonus features I would recommend Bringing My BFG to Life and The Big Friendly Giant and Me. Both of those bonus features give you great insight into how they brought this wonderful movie to life on the big screen. It’s a fascinating behind the scenes look at this delightful film. 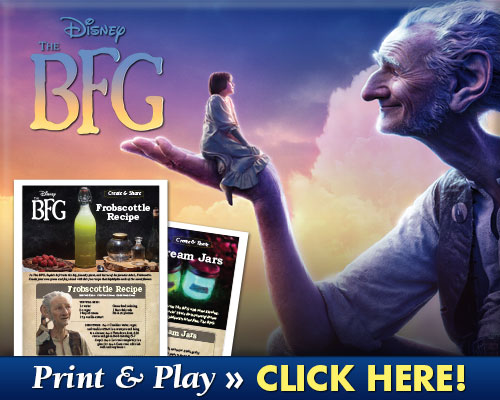 *I received a free screener copy to review. There was no compensation. The opinions expressed are my own and not influenced in any way.