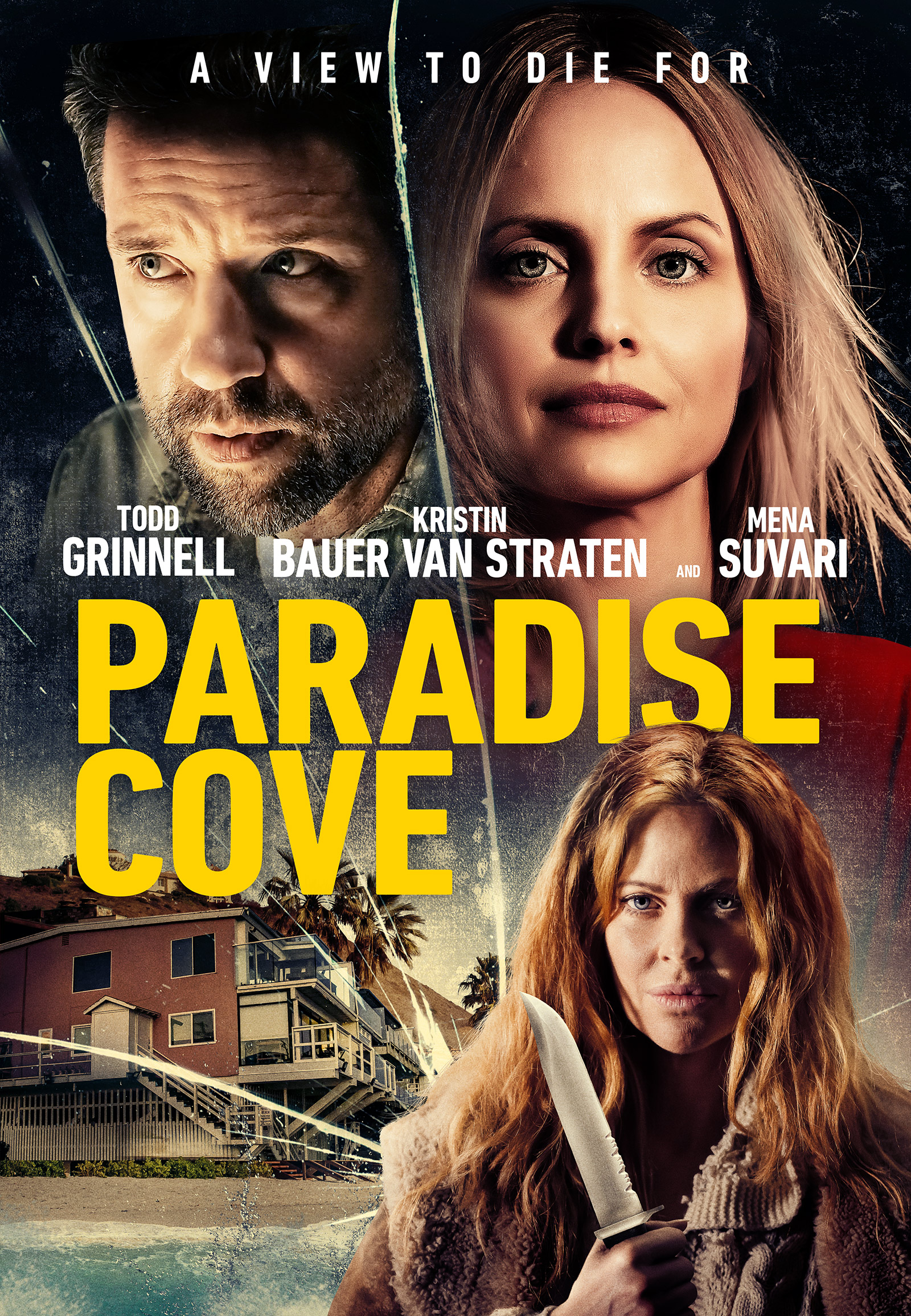 Available today On Demand is the thriller Paradise Cove.

The movie is available from Paradise Cove and was written and produced by Sherry Klein, and directed by award-winning filmmaker Martin Guigui (Beneath the Darkness,

Knox (Grinnell) and Tracey (Suvari) move into Knox’s late mother’s home in Malibu, California. It’s a very prestigious area with the wealthy and elite reside. It has spectacular views of the Pacific Ocean. It would be a dream home for just about anyone, except Knox and Tracey are not going to live there forever. The plan on “flipping” (fixing up to sell) the home. They cannot live there because it would not be within their means.

Unbeknown to them when they first move in that the home comes with a “bonus” – a homeless woman who resides underneath the home. Her name is Bree, and she is actually the former owner of the home.

Having an unwanted guest living under their home is not something that sits well with Knox and Tracey. They try everything they can to have her removed, but she just keeps coming back. Even the local law enforcement know who she is and feels like she’s not a threat to them (or is she?).

Tensions get high and horrible things start to happen to Knox and Tracey, and they know Bree is behind all of it.

Will they be able to get rid of the pest who lives within their walls, or will Bree win out and have them running from the home to save their lives? To find out, you need to check out Paradise Cove. Look for it today On Demand services.

I am not sure what this film is rated, but I would guess rated “R” due to some sexual situations. There is also a scene involving a dog that I find especially disturbing. The film makers showed more of that “situation” than I wanted to see. I wish they opted to “elude” to the idea that the dog was gone.

Overall this is more of a Lifetime type of movie than something you would watch in the movie theaters. The story line was a great idea, but I feel like something was “missing” from this film. This is a decent film, but I feel like there was something missing that could have made this a great film. Hopefully that makes sense?

Overall the acting was decent. Kristin Bauer van Straten pulled of “crazy” extremely well. The expressions she makes and the crazy eyes makes her look (and come across as) something who is truly out of touch with reality (psycho!).

Suvari and Grinnell did OK, but there wasn’t any chemistry there. They felt like they were more like room mates than a husband and wife. Even when they were being romantic with one another, it just didn’t feel genuine.

The movie goes along at a steady pace. It doesn’t drag (thankfully). It’s a bit predictable, but none the less, entertaining.

I think the movie is a bit far fetched in some ways. For example, I find it hard to believe the Police would not help remove Bree from the property. I also find it hard to believe that Knox and Tracey never saw or sensed Bree was in their home. If there was a homeless, crazy person living under my home, I would be certain to lock everything, and install alarms and security cameras. I wouldn’t leave anything up to chance. But… it’s a movie, so it’s not going to necessarily be a real life scenario.

Check out the film’s trailer (below).

*I received a free screener link in order to do this review. There was no compensation. The opinions expressed are my own and not influenced in any way.

Previous Post: « 10 books coming to a screen near you in 2021
Next Post: 5 Natural Remedies to Manage Anxiety »

This site uses Akismet to reduce spam. Learn how your comment data is processed.